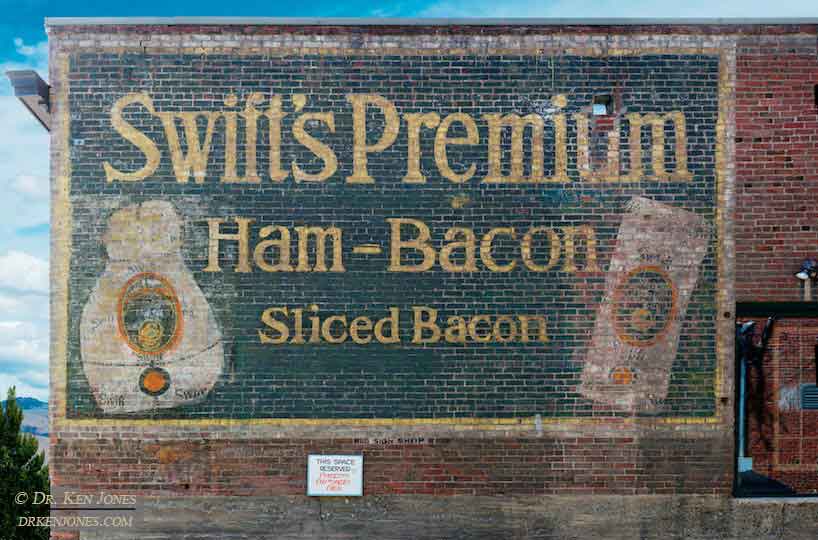 I have updated my ghost sign database to include the signs shown on the map.  I have added just over 500 new ghost signs from Arizona, California, Oregon, Washington, Virginia, Illinois, Idaho. New Mexico, Utah, Colorado, Wyoming, and Montana.  There are a few re-shoots, but mostly these are new additions. 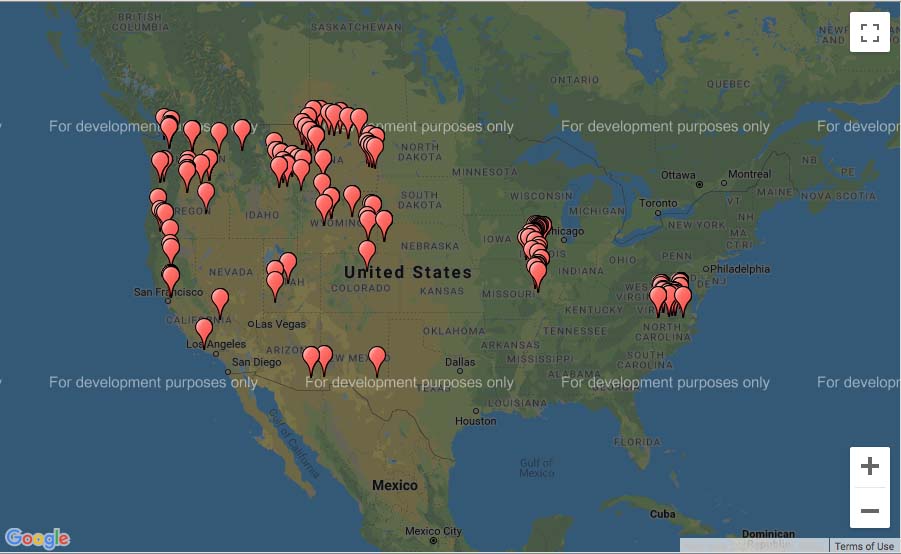 Here is a sampling of some of the more unique examples from the newly added ghost signs.  Many of these have already been destroyed since I photographed them in the last four years.

I have updated my database of ghost signs I have photographed.  I added around 800 new signs, mostly in Connecticut, Georgia,  Virginia, and West Virginia. There are also many signs from Milwaukee from 2013.

Here are maps showing the extent of the United States I have photographed.  The red markers indicate ghost signs that are now available on my database.  Click here to get started browsing. 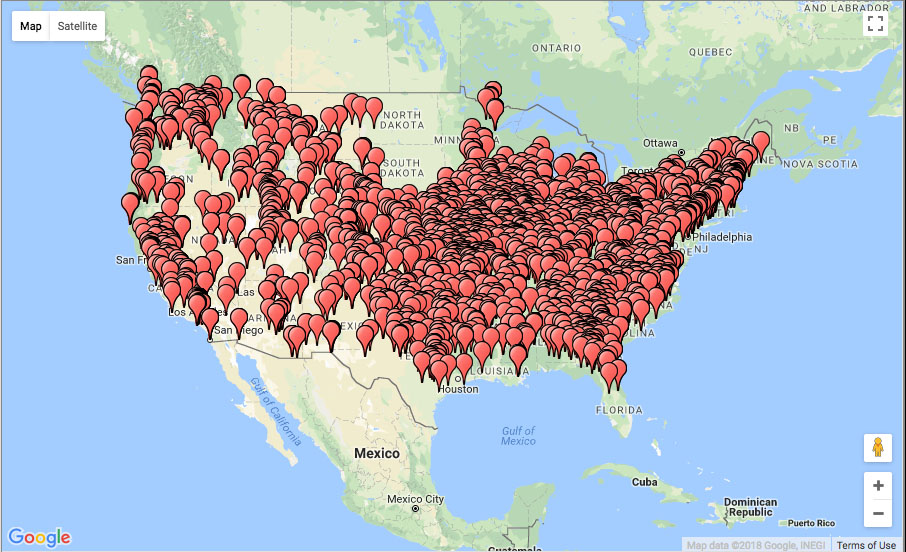 The brown diamonds are towns where I have photographed ghost signs.  I am currently working on adding approximately 1500 more signs to the database. 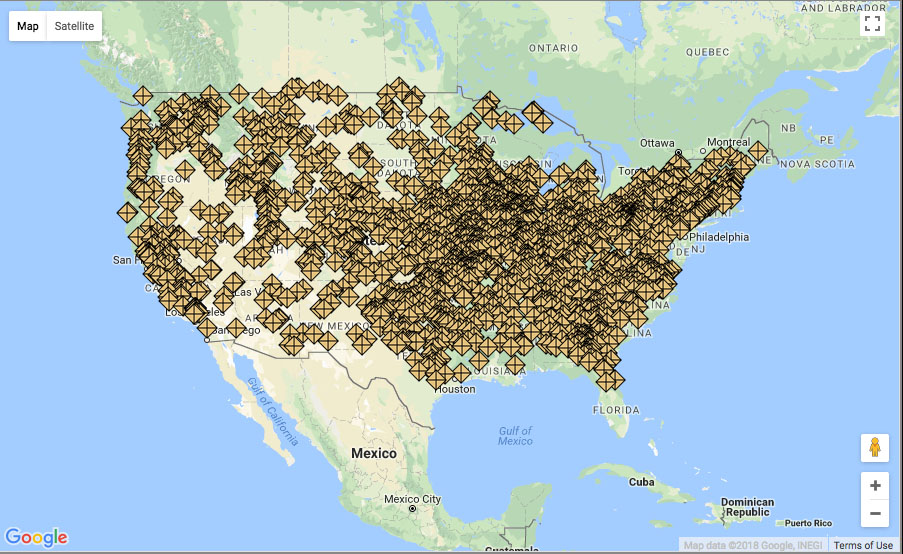 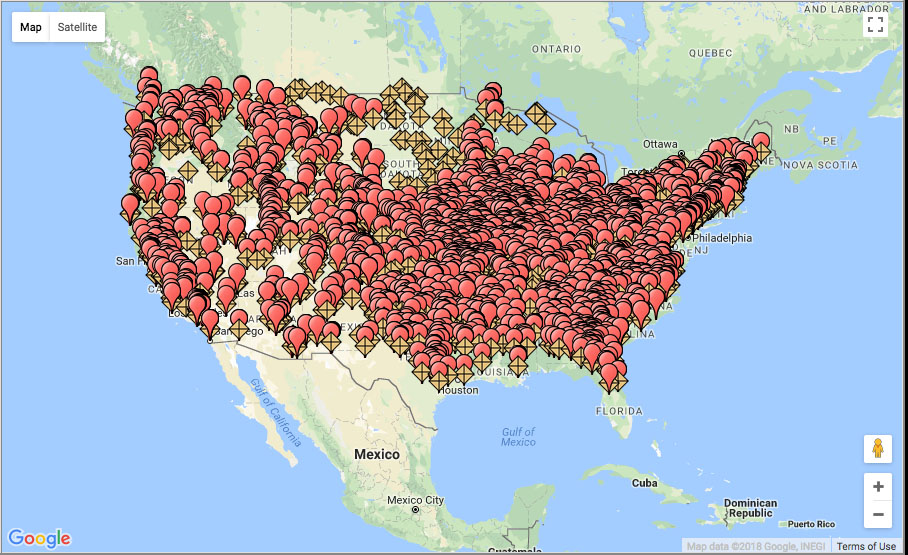 I have many more ghost signs to post, but I thought I would concentrate on this sign I found yesterday in West Frankfort, Illinois. It was revealed in the last two weeks by the collapse of a brick protective wall.  I had been to West Frankfort before, I was going to photograph another sign across the street from this one that I had missed, but – WOW – here it was! 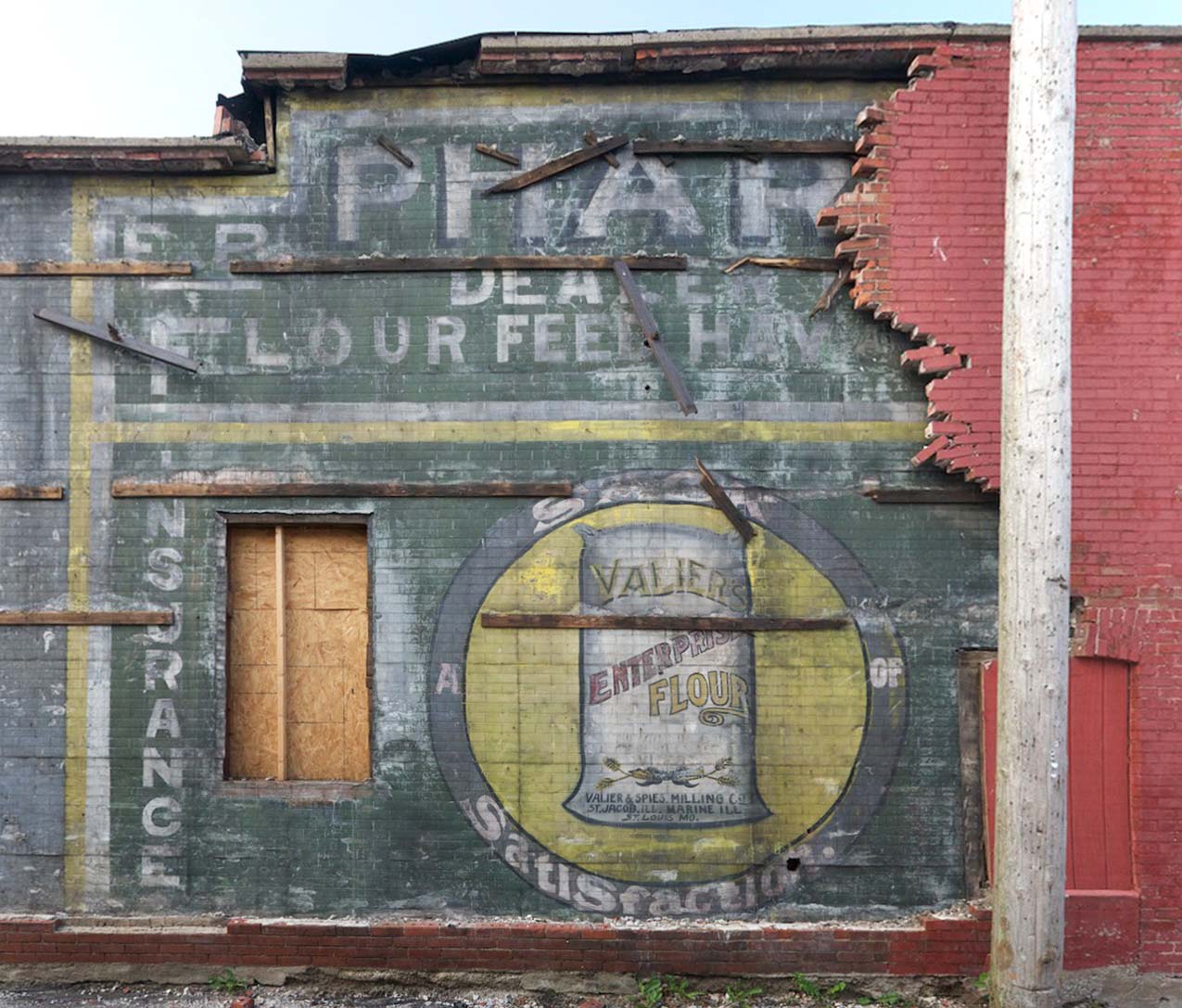 While I was photographing this sign, I spoke to a woman going into the back door of an office in the alley.  It turns out it is the town Newspaper – the West Frankfort Gazette.  Here is a link to their article about the sign that has more history – http://www.wfgazette.com/news/local-history-uncovered-at-condemned-building/article_6fed82f2-3438-11e7-bb9b-9b4eedb6bce9.html 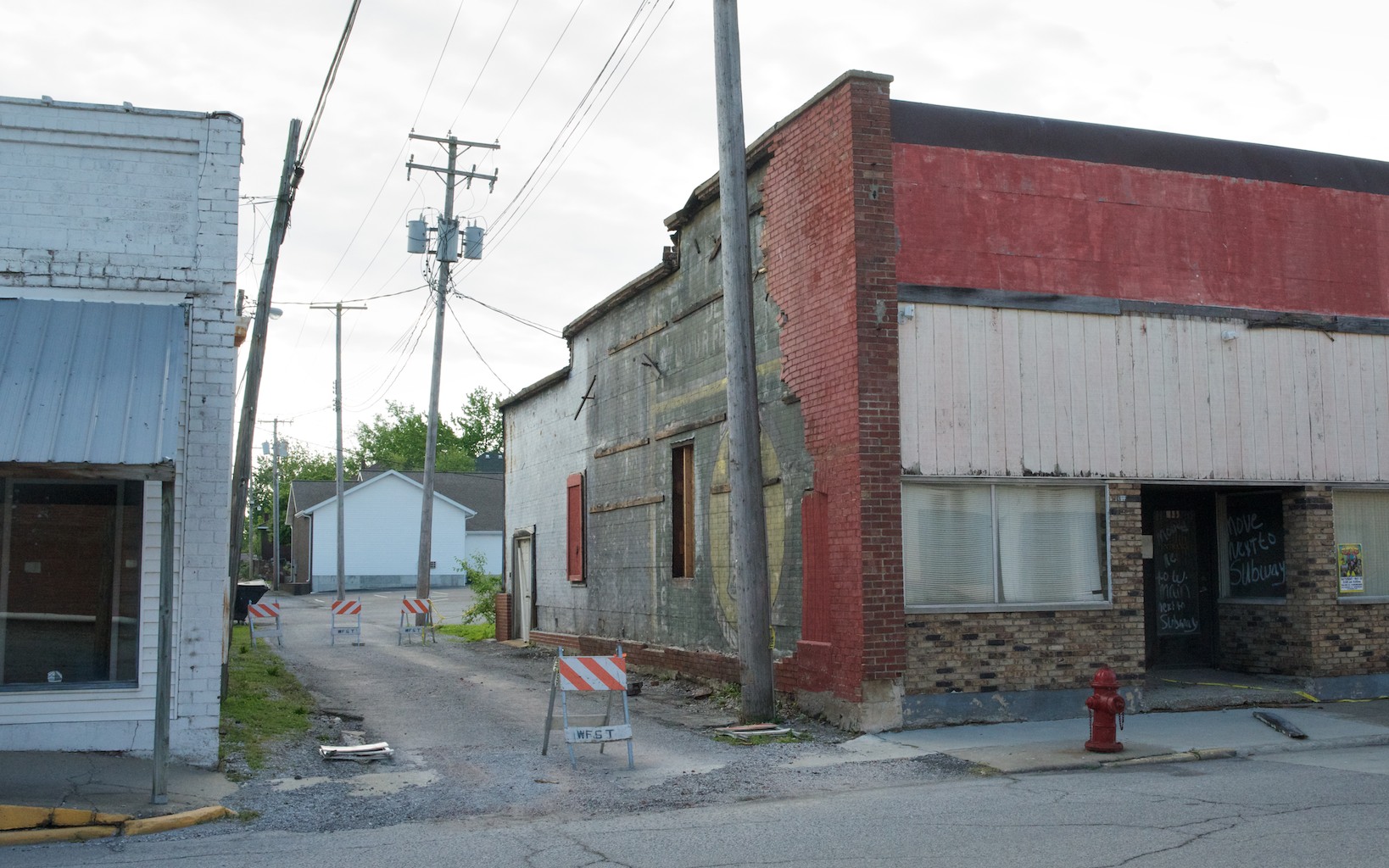 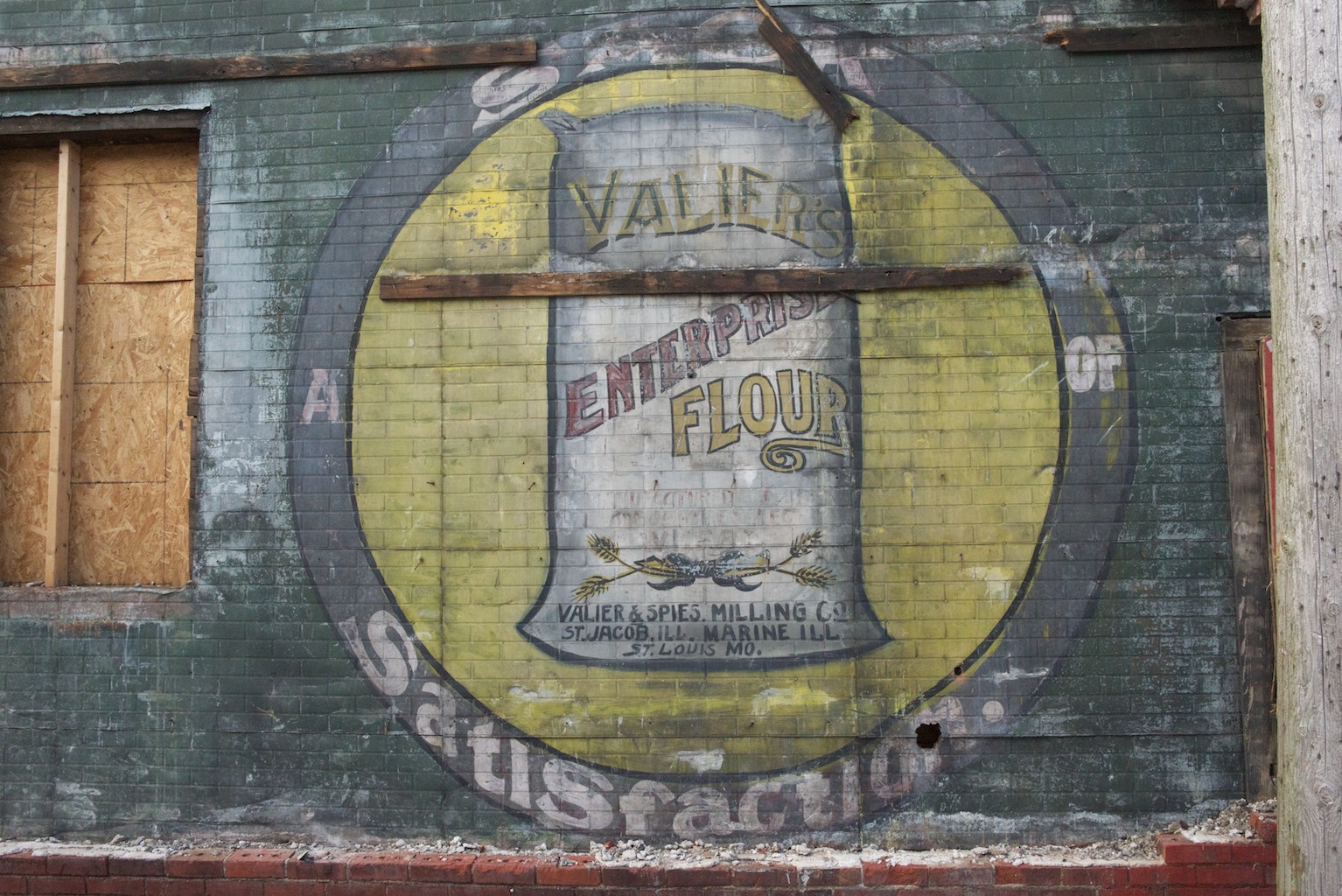 It is in beautiful shape. The building itself is apparently in need of demolition.  Hopefully, they will be able to save this remarkable sign. 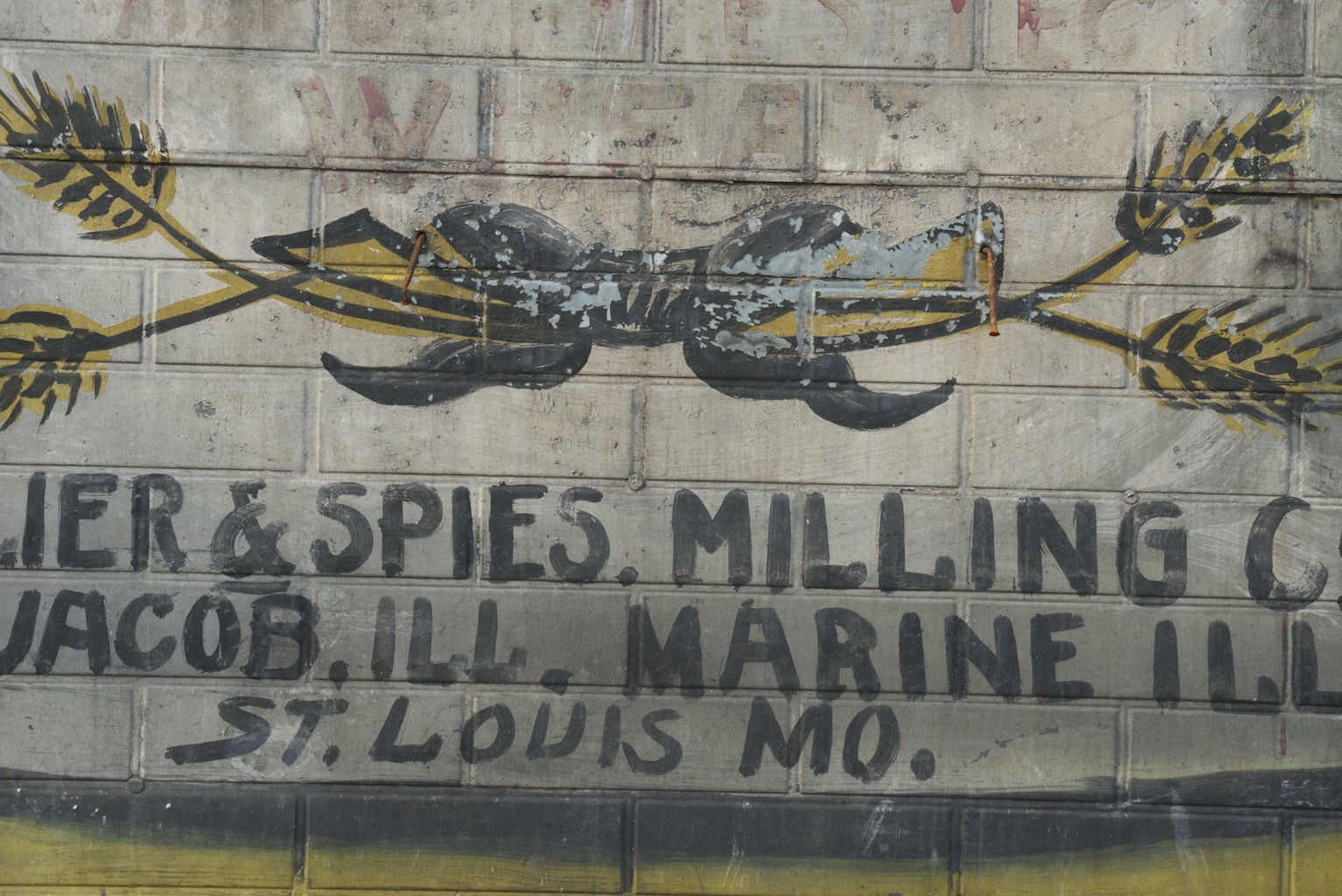 The Traveling Saleman Problem – finding the shortest route among multiple locations – leads on some fairly strange twists and turns in one’s route.  I went back and forth several times where the state of Ohio, Indiana, and Kentucky meet

I thought I had posted enough barn photos, but this unusual ad for Old Loyalty tobacco changed my mind. It is located north of Madison, Indiana. 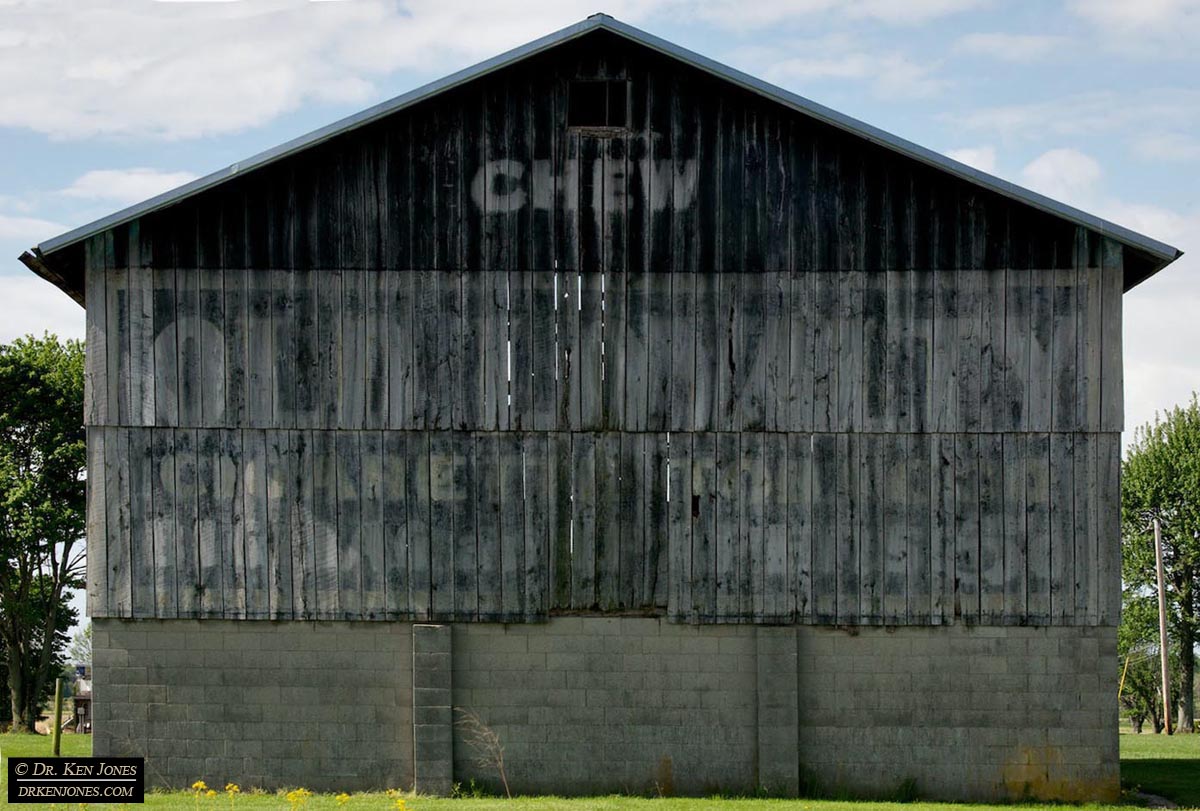 A combination of Selz Shoes and Coca Cola was painted over with white paint sometime in the past.  It has now been exposed and is next to a memorial park which seems to feature this sign in Wilmington, Ohio. 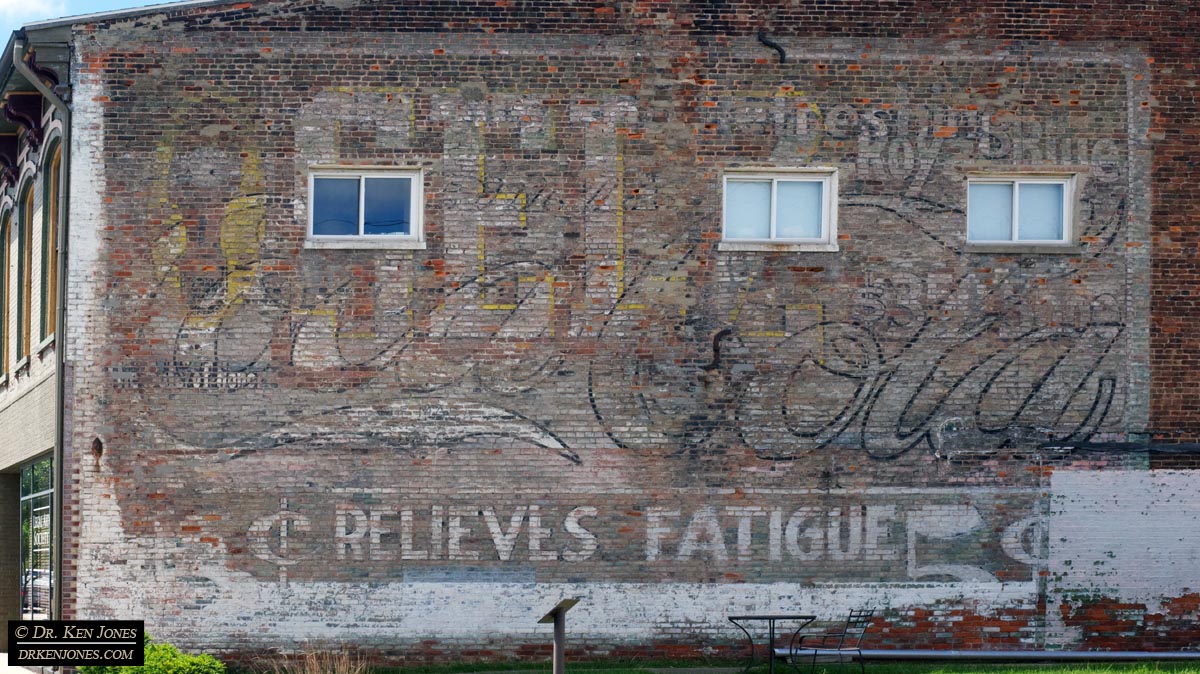 The difference between the modern white paint – easily flaked off – and the underlying sign paint is pretty obvious here.  The white paint may have, in fact, protected the sign. 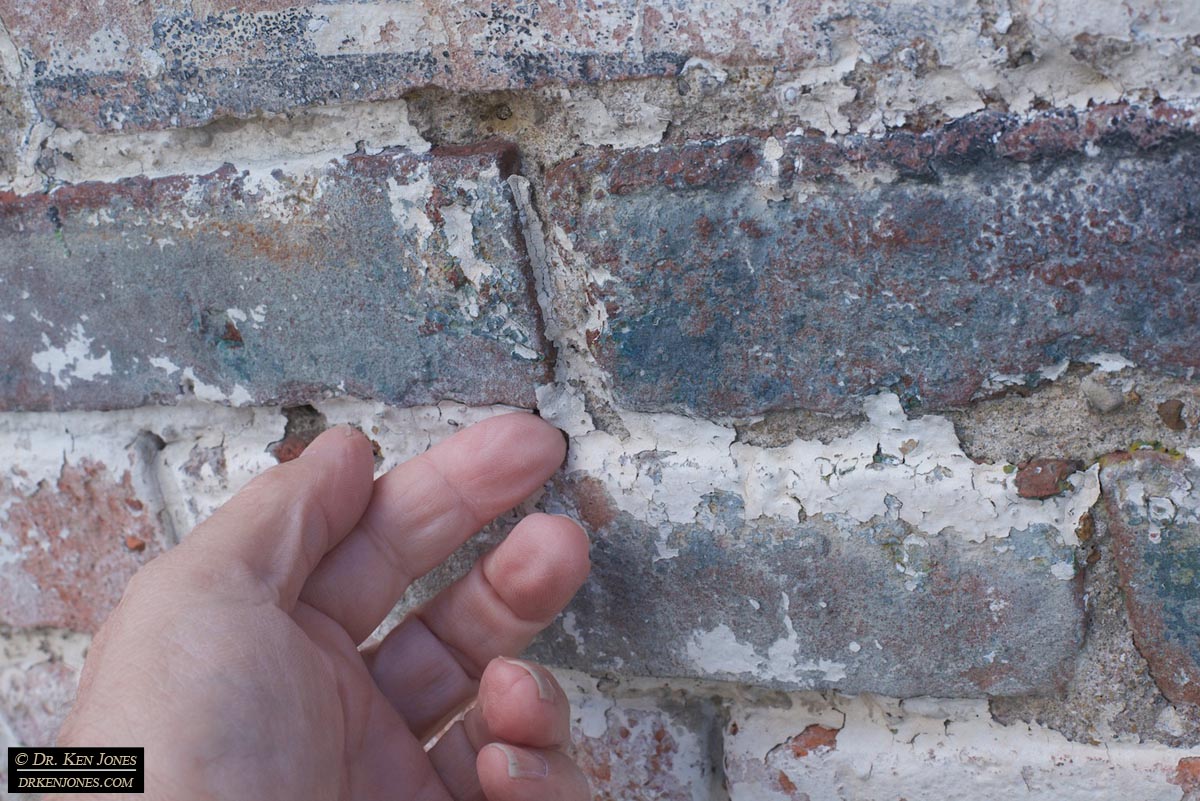 I made some new friends in Seymour, Indiana.  I went there to locate a Dr Pepper sign painted on wood, but had no idea of the location. When I stopped to photograph this Gold Medal Flour sign, these two gentlemen – Tim Decker on the left, and Jim Noelker on the right – came over and we started talking.   Jim has a sign company, Westwind Signs in Seymour, so he knows his signs. He also knew where the elusive Dr. Pepper sign was located.  Thanks to both! 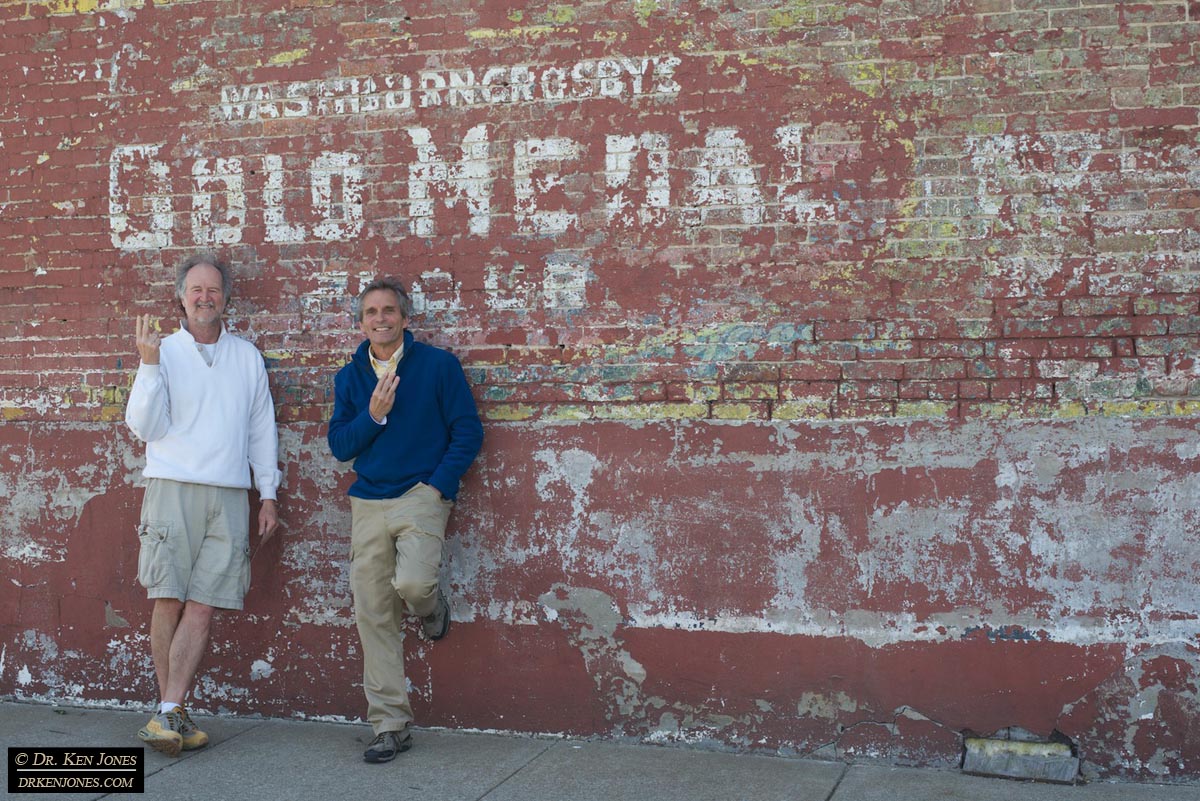 Thanks to Jim for taking the rare photo of me. 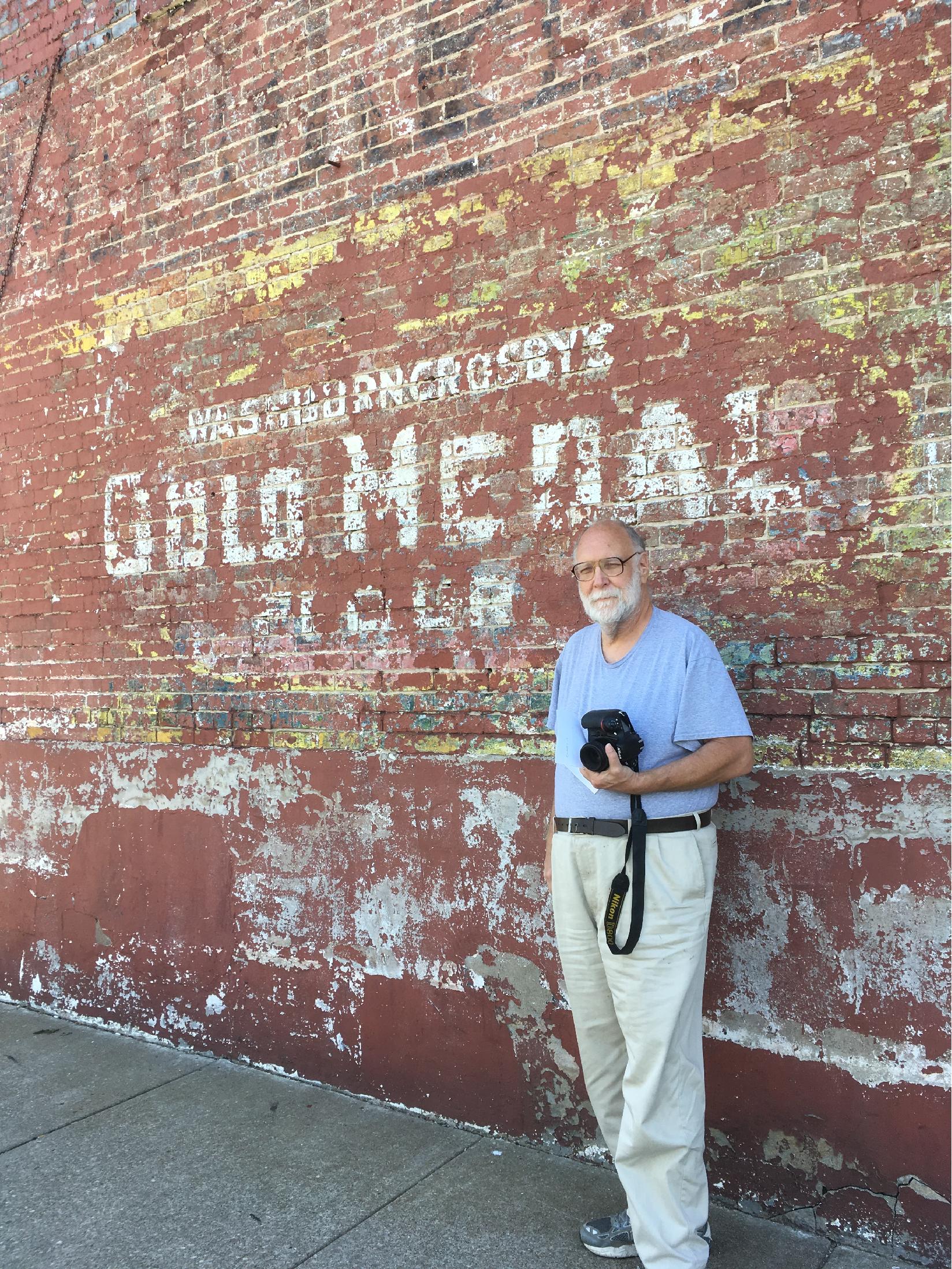 The entire side of the building was originally covered with graphics, but when the building owner repainted, he nicely left the main Dr. Pepper untouched. 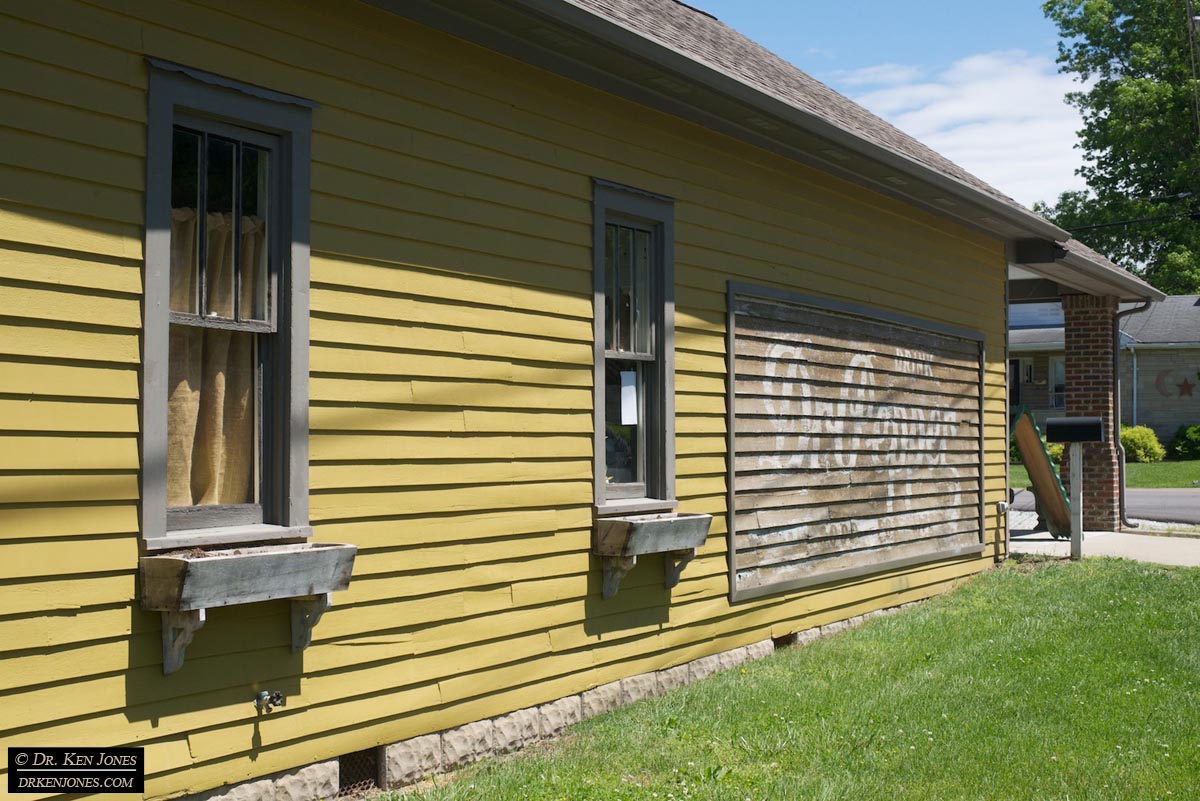 And, as frequently happens, the “best” sign in Seymour, Indiana, was unknown to me before I arrived.  This one contains, among other things, an ad for Cremo Cigars. 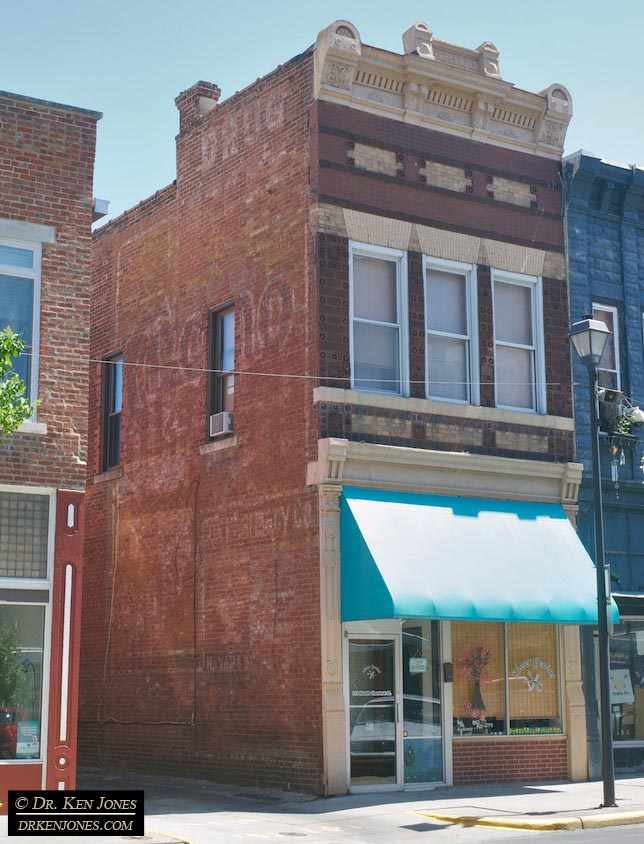 I have visited many towns more than once, looking for signs I may have missed. This one, in North Vernon, Indiana, is painted at an angle to match the slanted roof line instead of the line of the bricks. I don’t recall hearing the term Foot Fitter before. 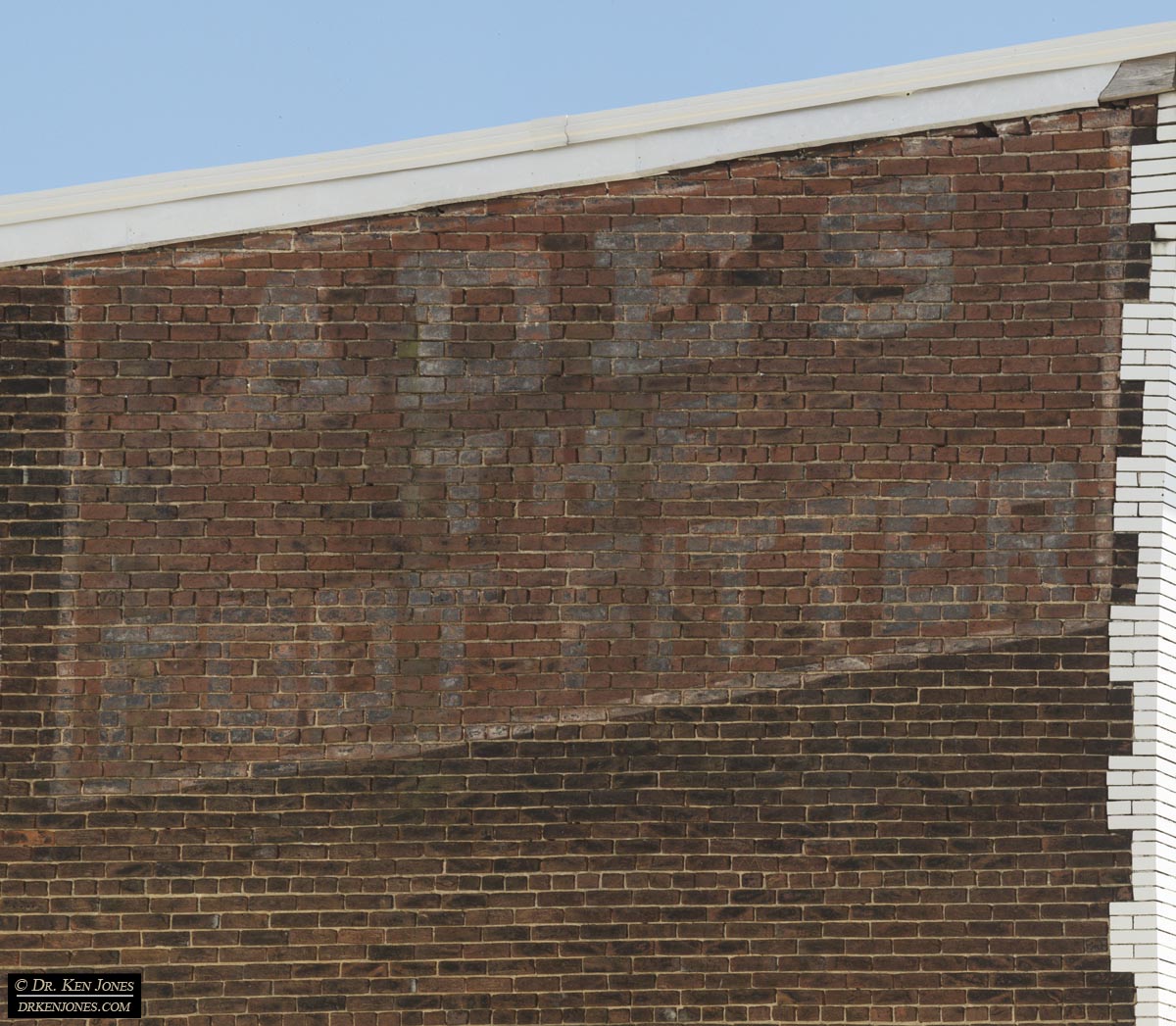 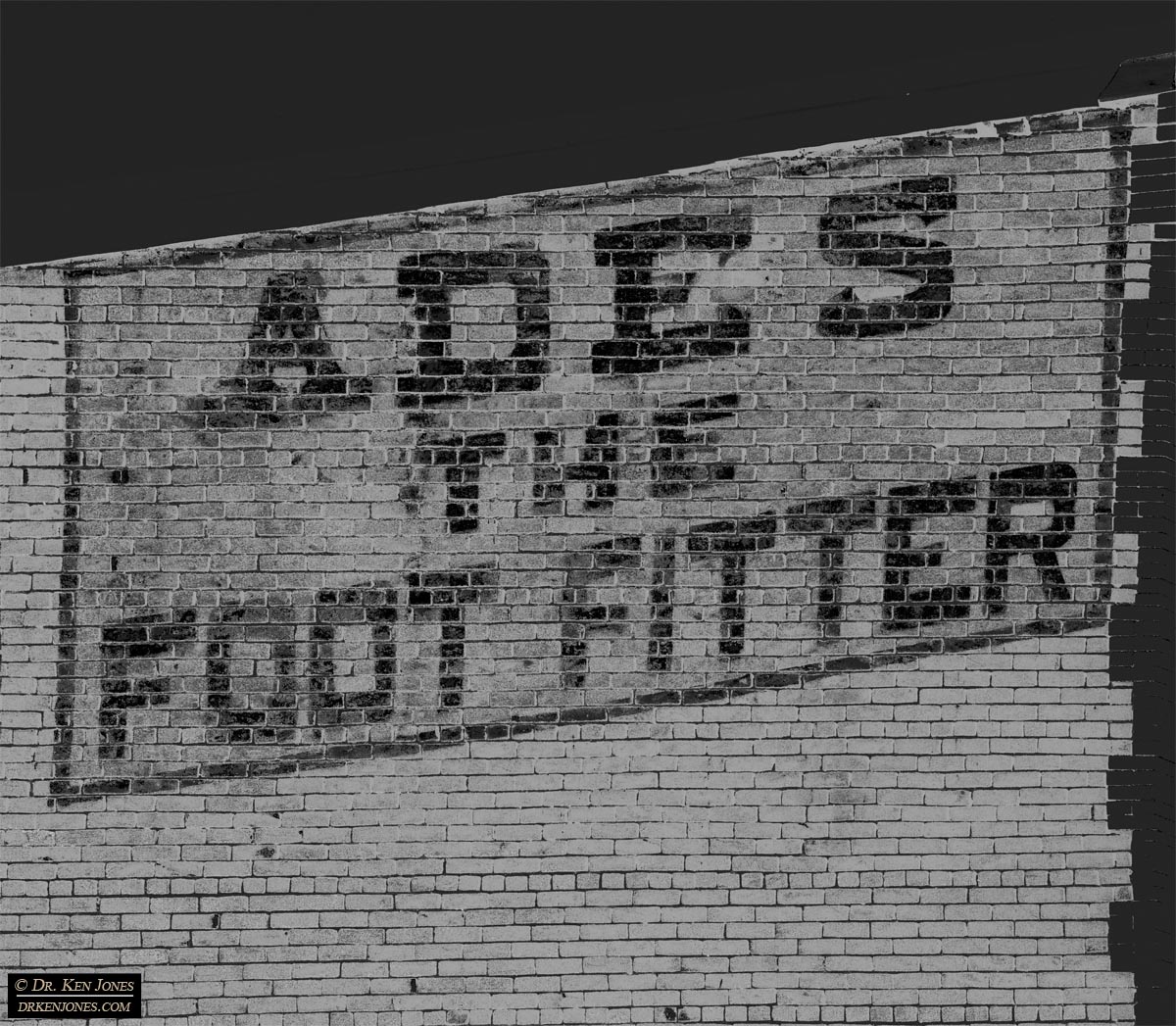 I also returned to Maysville, KY, to see if I could have better access to a Coca Cola sign with multiple layers. I spoke with the building owner, but there really wasn’t any access short of getting a high lift.  However, I was able to rephotograph this sign for Poyntz Bros. Whiskey.  The trees had been trimmed which made parts of the sign more visible. However, it still took some moving the camera around to get complete coverage shooting between the tree and the buildings. 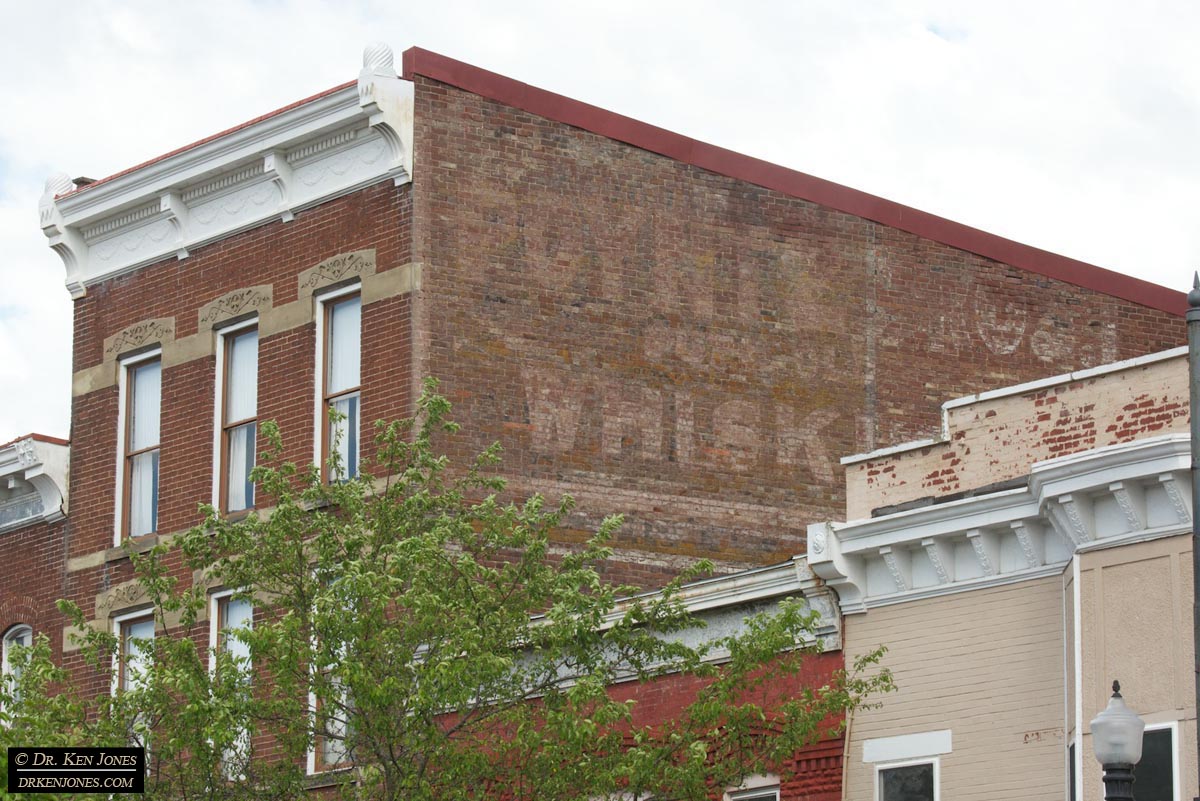 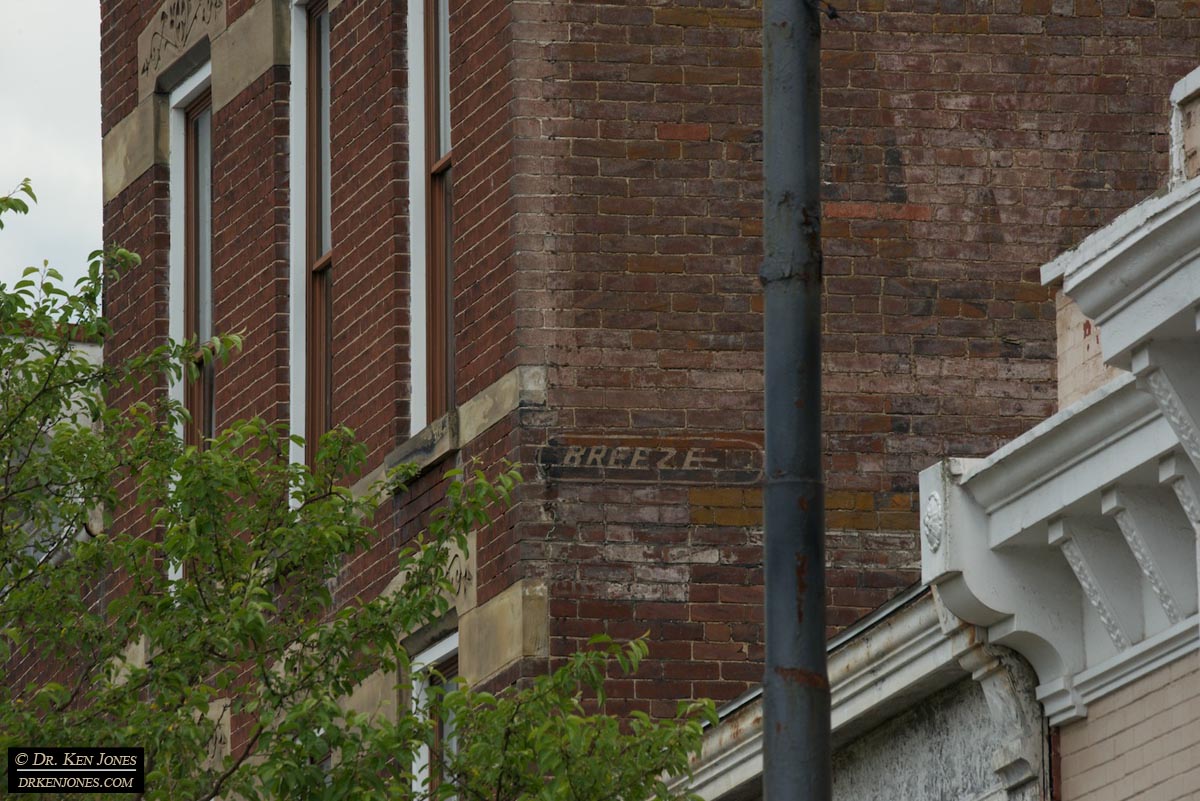 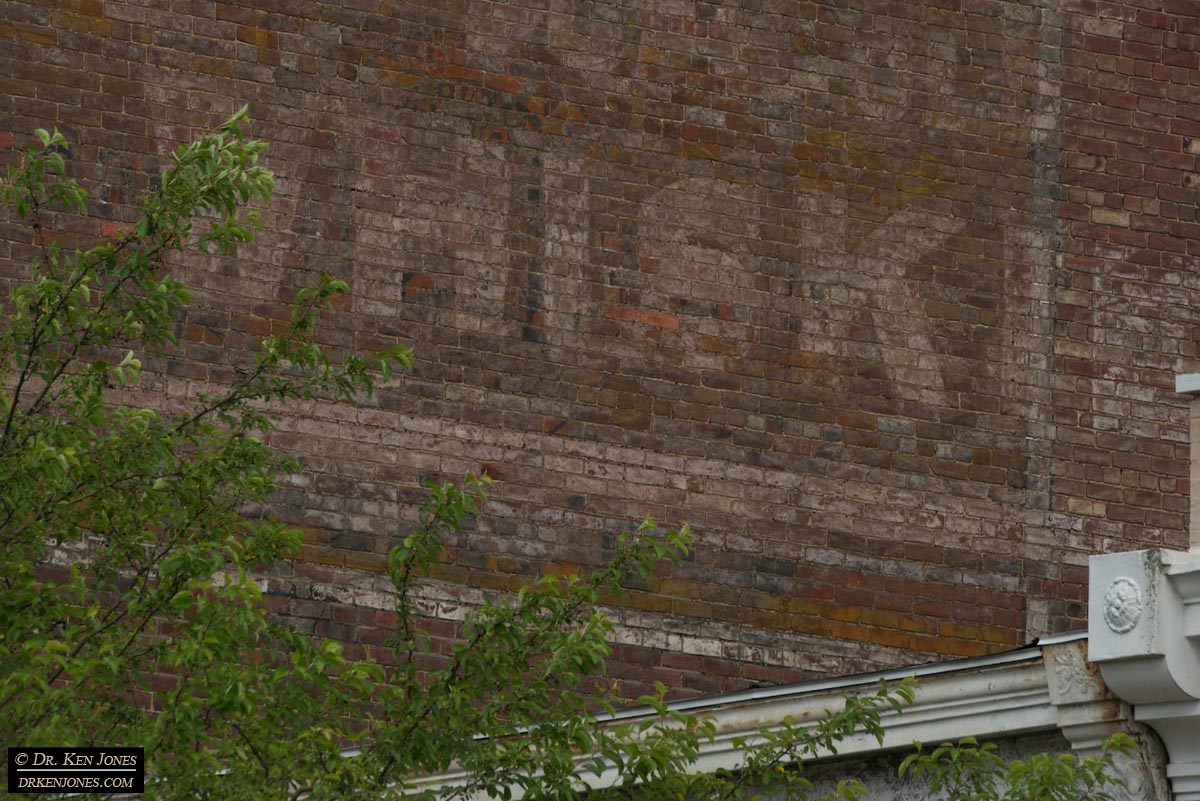 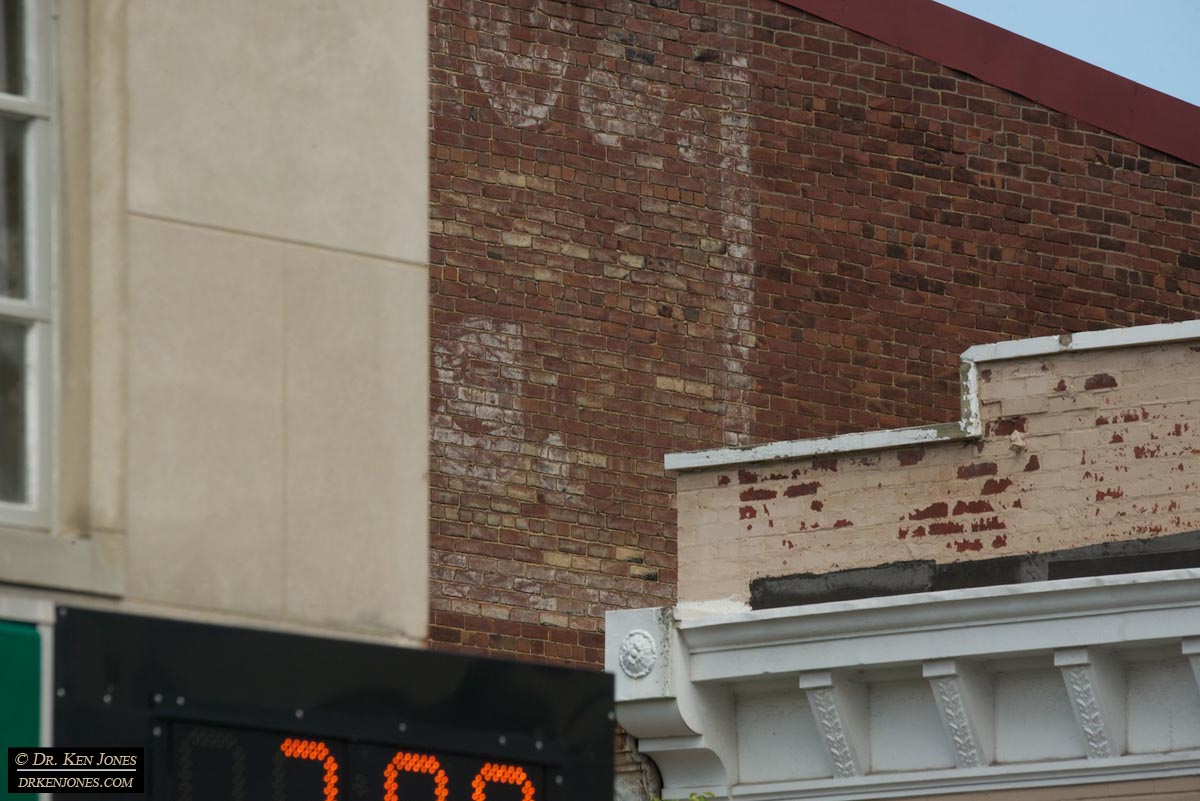 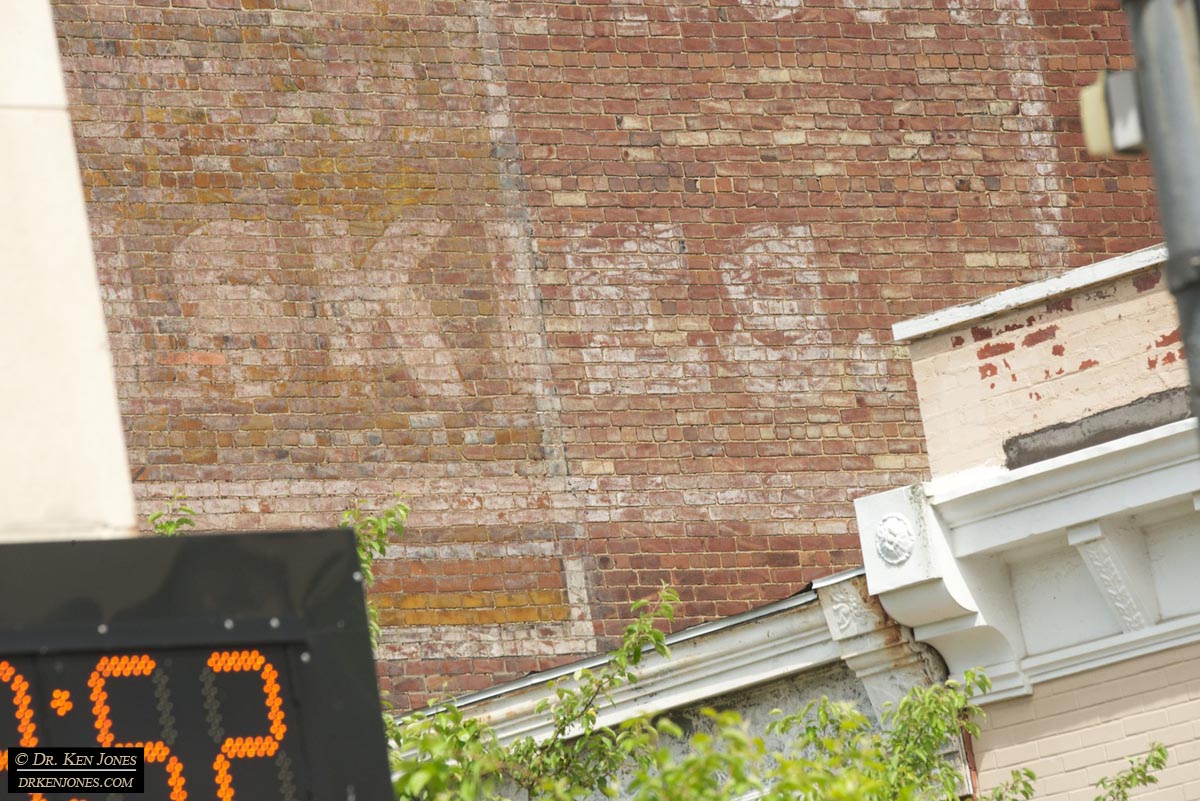 Although not as old, this interesting sign explained some of the jet engine noises I heard in the distance. 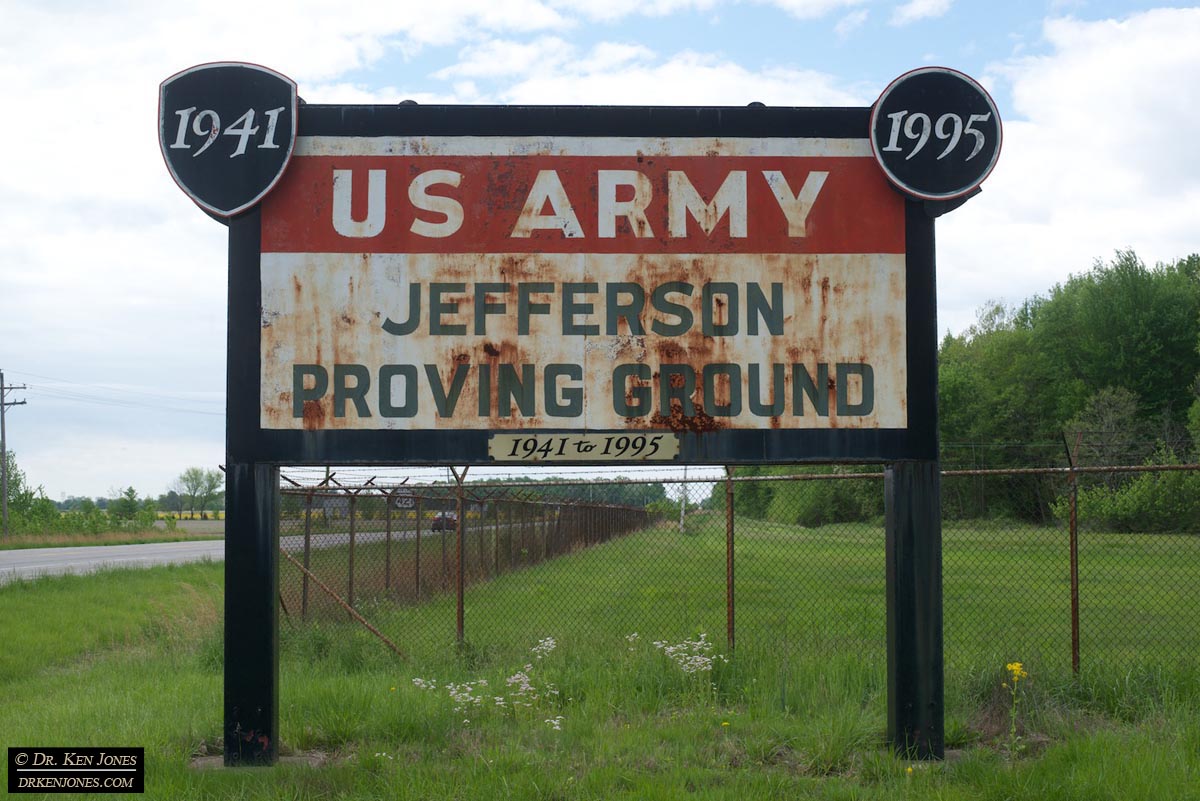 I had this sign in Albany, Indiana, on my must-visit list since 2009.  I had no idea whether it was still there, but there it was, looking unchanged from the 2009 photo posted online. 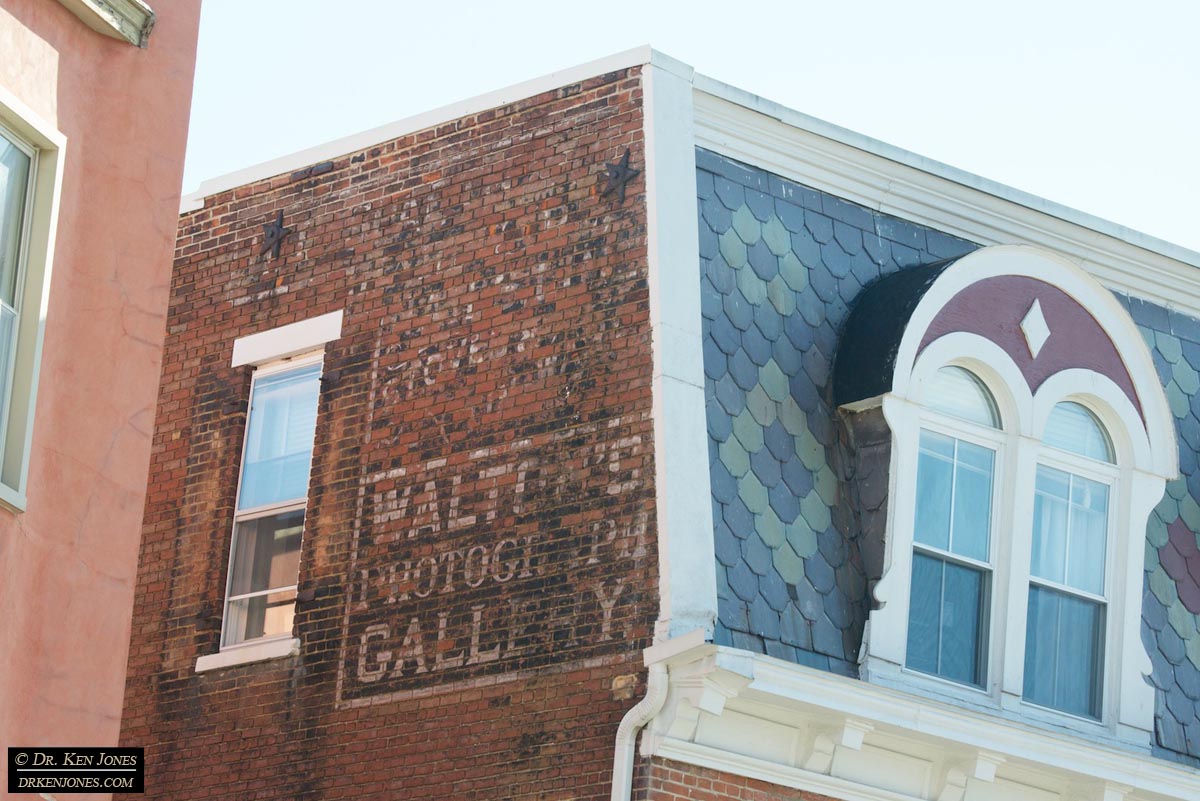 Madison, Indiana, is a beautiful tourist town (in the best sense) along the Ohio River.  For those of you unfamiliar with US History, the Ohio River played a most important role in the history of our country from the mid-1700’s onwards.  If you are ever interested in the truly beautiful drive, follow the river from it’s beginnings in Pennsylvania until it meets the Mississippi at Cairo, Illinois.

Madison had two signs I had missed on a previous visit. The Pillsbury’s Best Flour I had totally missed back in 2009. 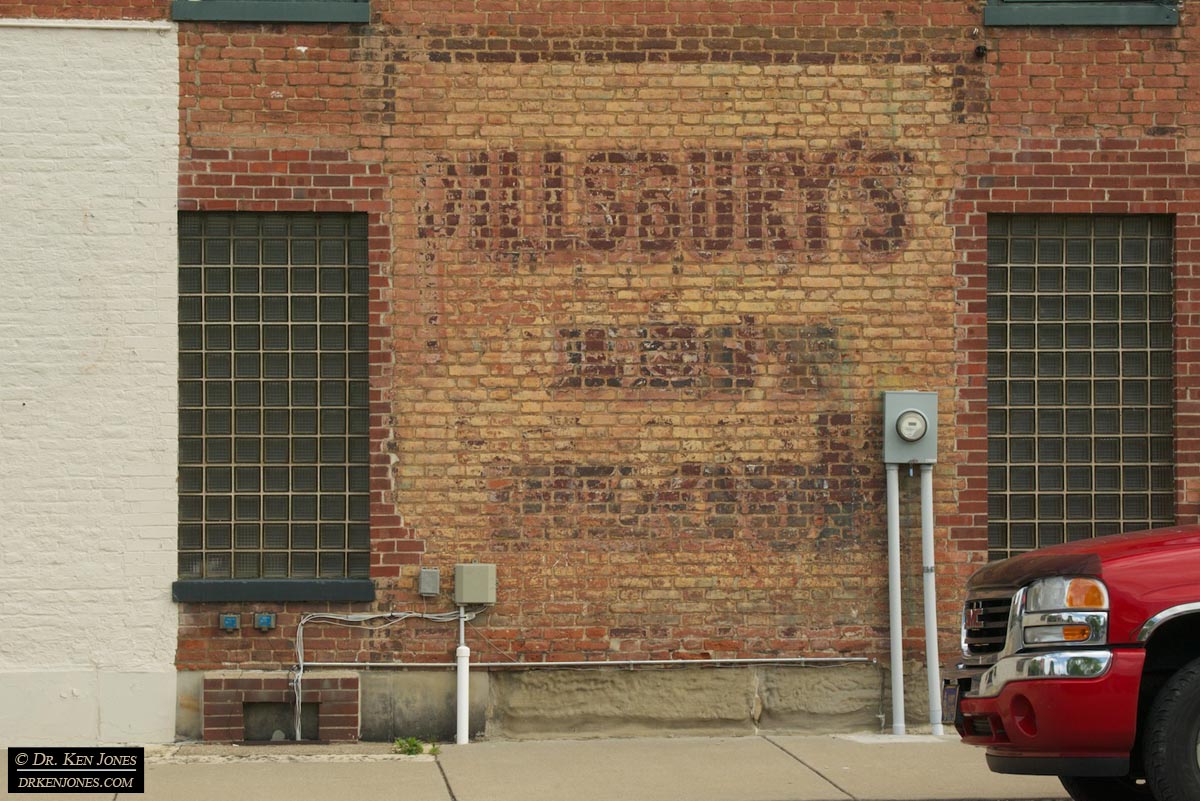 I knew this second sign existed, but couldn’t find it before. With more internet resources including city directories and company histories, I was able to locate it this trip.  “See Hen & Ben The Shoe Men” 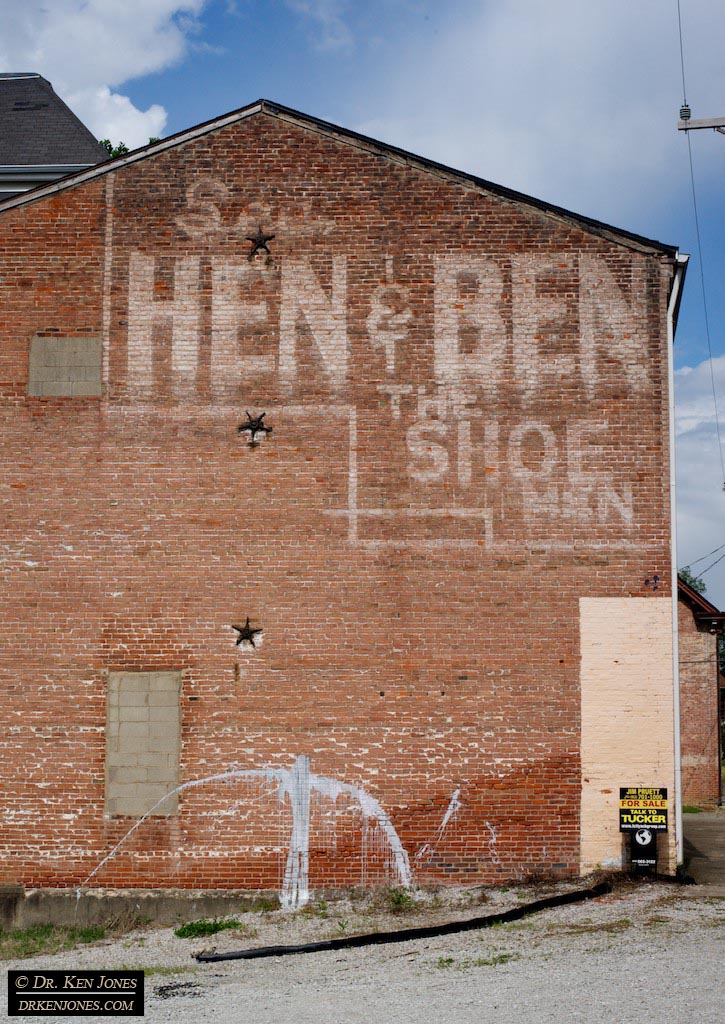 One last photo,  a historic bumper sticker on a historic truck which also had a historic license plate. 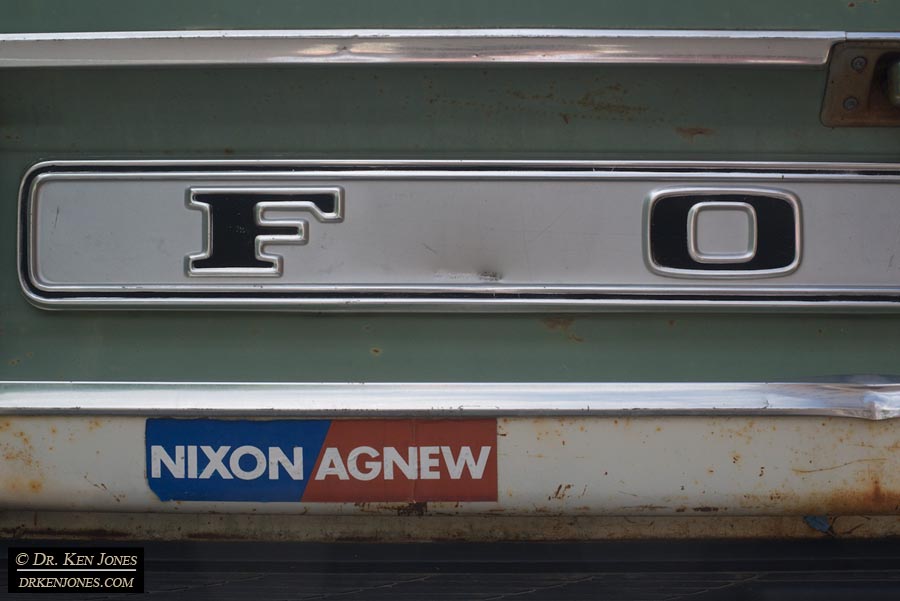